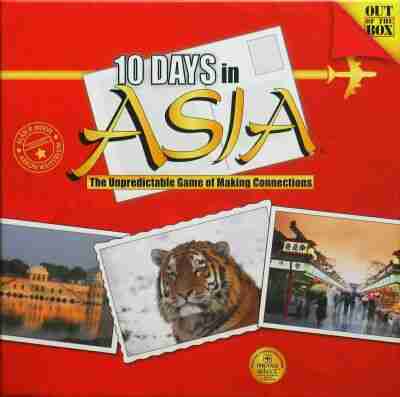 So, you might remember that I recently shared our experience with the game 10 Days in Africa. I mentioned that there are other versions of the game- Asia, U.S., and Europe. Well…it got me thinking about the other continents. Would there be an Australia version? South America? When I visited the website I didn’t see anything new so I decided to contact Out of the Box Publishing. I asked if there were plans for Australia and South America.

They replied! Here’s what I learned…there is no Australia version yet, but a new version called The Americas is due out June, 2010! I’ll be watching for that one. It’ll include North and South America.

In the meantime, they very graciously sent me 10 Days in Asia to review for you! I am just so excited!

The kids did not waste time cracking open the box. It arrived last week and we’ve already played a bunch. We’ve been hauling it to LEGO practice and playing like crazy while we wait. Nothing like hearing your kids discuss the finer points of moving around the continent of Asia.

This game has more modes of transportation for getting around. 10 Days in Africa has a truck and an airplane. Asia here has planes, railroads, and ships and there are two oceans to navigate. Pretty tricky.

To play the game you draw 10 cards and you have to arrange them in the best order possible. There are rules about how you can fly from country to country (they have to be the same color with a matching plane) and how to get to bordering countries. The other thing is that when you draw a card (either from the top of the discard pile or a new card), you can’t just move the others around. You can only put a new card where the card you discard goes. So, you have to do a bit of planning and if you don’t set up your itinerary carefully in the first place you are going to struggle.

You might guess that we want to collect them all. While they play very similarly, each time you play it’s a new game because you never know what you’ll be dealt. The age recommendation is 10 and up, but I7 can play with some success and R9 is quite good at it. The game retails for about $25 depending on where you purchase it.

What a fun way to play with geography! My sincere thanks to Out of the Box Publishing for letting me try out a new game.

I don’t know about you, but I’ve been doing a lot of thinking with the Christmas season arriving…you know…about what to get for the kids. Good news! Rainbow Resource carries this series of games. So, if you happen to be in the market for some new homeschool games, don’t forget this geography fun!