One of the units I had planned to do with the kids this year is Native Americans. I had not had the chance to really develop the unit over the summer, but I had some ideas of what I wanted to include as an overview of the various tribes across the United States and North America. I planned on using it in November because we can talk about the northeastern Native Americans as Thanksgiving approaches. I know. Terribly clever.

After reviewing one of my cool new resources- The Evan Moor History Pocket on Native Americans, I decided to use it as the basis for our exploration. We’ll be using some picture and chapter books along the way and we’ll see where our studies take us.

Have you ever used History Pockets? Oh these are a gem of a resource and offer some excellent print outs for students. We used the Going West History Pocket when we did our Little House on the Prairie Unit. All that gorgeous paperwork in that link is from the history pocket. 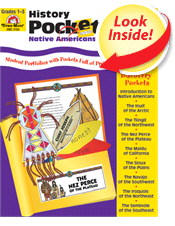 We have five weeks until the week of Christmas which means I need to decide how I will time out this unit. I had planned to begin a new study after the New Year, but I may need to rethink that. Five weeks and eight nations of Native Americans. That’s how things are shaping up. Be sure to check for updates as we travel and meet these peoples.

Some other links and information I came across:

Candace’s Native American Unit Study Candace took a different approach to her unit. Check it out because she has some good ideas.

If You Lived with the Iroquois This is a unit from Homeschool Share. I’m sure we’ll spend some time with this book since we live in the heart of the Iroquois region.

Native American Regions I always get confused about which tribes were where and which ones belonged to which nation. This is a really helpful site with a map.