It’s that time of year and I know some of you have been waiting with bated breath on this year’s adventure boxes. What are adventure boxes? It’s an idea I saw last year on the FIAR boards where you and your child pick a theme and then the child is provided with materials to explore the adventure for the summer. This is a great way to encourage reading and other activities once school is finished for the year and it’s a bunch of fun!

E9’s has undergone some changes. We’ve been discussing these boxes since probably March or April depending on the child. For a long time he had chosen Redwall, but then didn’t like most of the fun ideas I came up with- can you believe this? In the end, Dan came up with a few ideas and E9 loves them.

With his allowance a while back, E9 purchased a guitar from Target of all places. It seems like it will do the job of letting him learn a bit to start. We also bought some resources from Rainbow Resource for the job. Hopefully he will stick to it and continue on into the fall and beyond. He has his eye on some Jars of Clay sheet music which he desperately wants to learn to play!

Great little guitar but I would have thought it would come with more than a few cards with chords on them.

Notice how the strings are labeled. I don’t know if that will be helpful or not, but we’ll see.

We decided on this instructional book which comes with a CD and a DVD from Rainbow Resource. Also on its way is the supplemental song book for the same level. This series has room to grow if he wants to continue.

I wanted to be sure and include some music theory so he’ll be doing this notespeller along the way. This will teach him the names of the notes as well as what each kind means.

Dan also thought computer programming would be fun for E9 to learn this summer. Right now he is using a program called Scratch. It is more of a modular programming system developed at MIT. You click and drag different commands and make the object do certain things. It does a good job of teaching programming structure and some other basic things. All the kids are in love with it and ask to play around, but E9 has daily assignments left by Dan and they email each other back and forth during the day regarding said assignments. E9 learned how to send his finished product to Dan and then gets a reply with more directions or conversation. Pretty cool.

Below is a screen view of Scratch 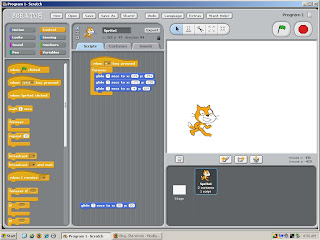 Along the way, he has been learning new geometry skills and we had to break out the protractor! I will probably add to this post to update everyone on E9’s progress.
There is another programming download for kids that has a fee, but allows them to program games to play. This has definitely peaked Dan’s interest. I think it takes him back to his early programming days on the Commodore- is that right Dan? I’ll have to get back to you on the name of it with a link… Ok I remembered it! It’s called Phrogram. Word on the street is that if E9 shows stamina for learning programming, Dan will pay for Phrogram.