Do you have any game lovers in your house? I have some here and providing an Adventure Box full of games and their history along with activities would be a great challenge for any game loving child. 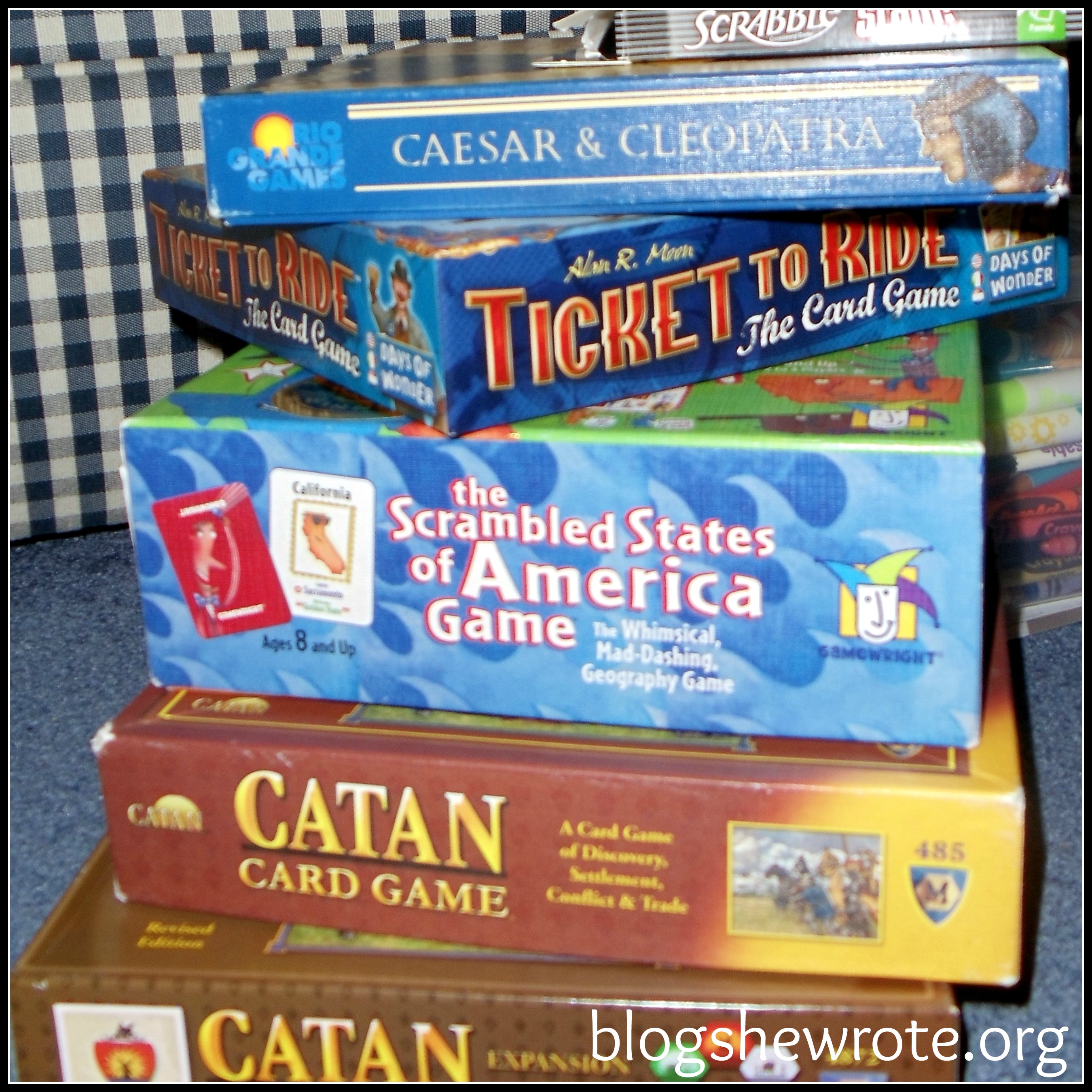 No Adventure Box of Games would be complete without the frequent opportunity to play games. I would definitely choose some new games to add to our repertoire for this theme. I might add a large board game and a smaller game like a card game. Remember you can choose what to add to the Box and when. Surprises are always fun! 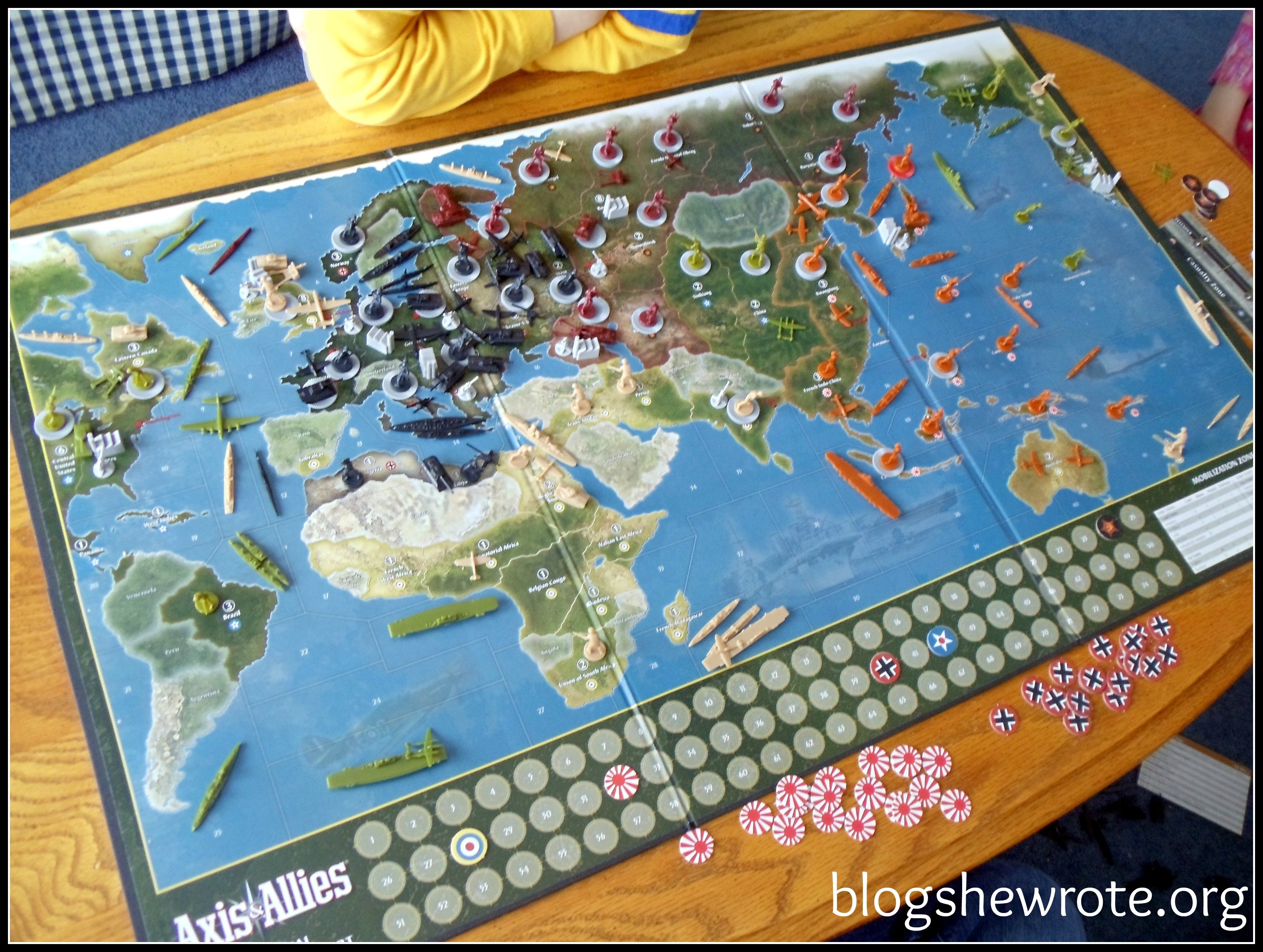 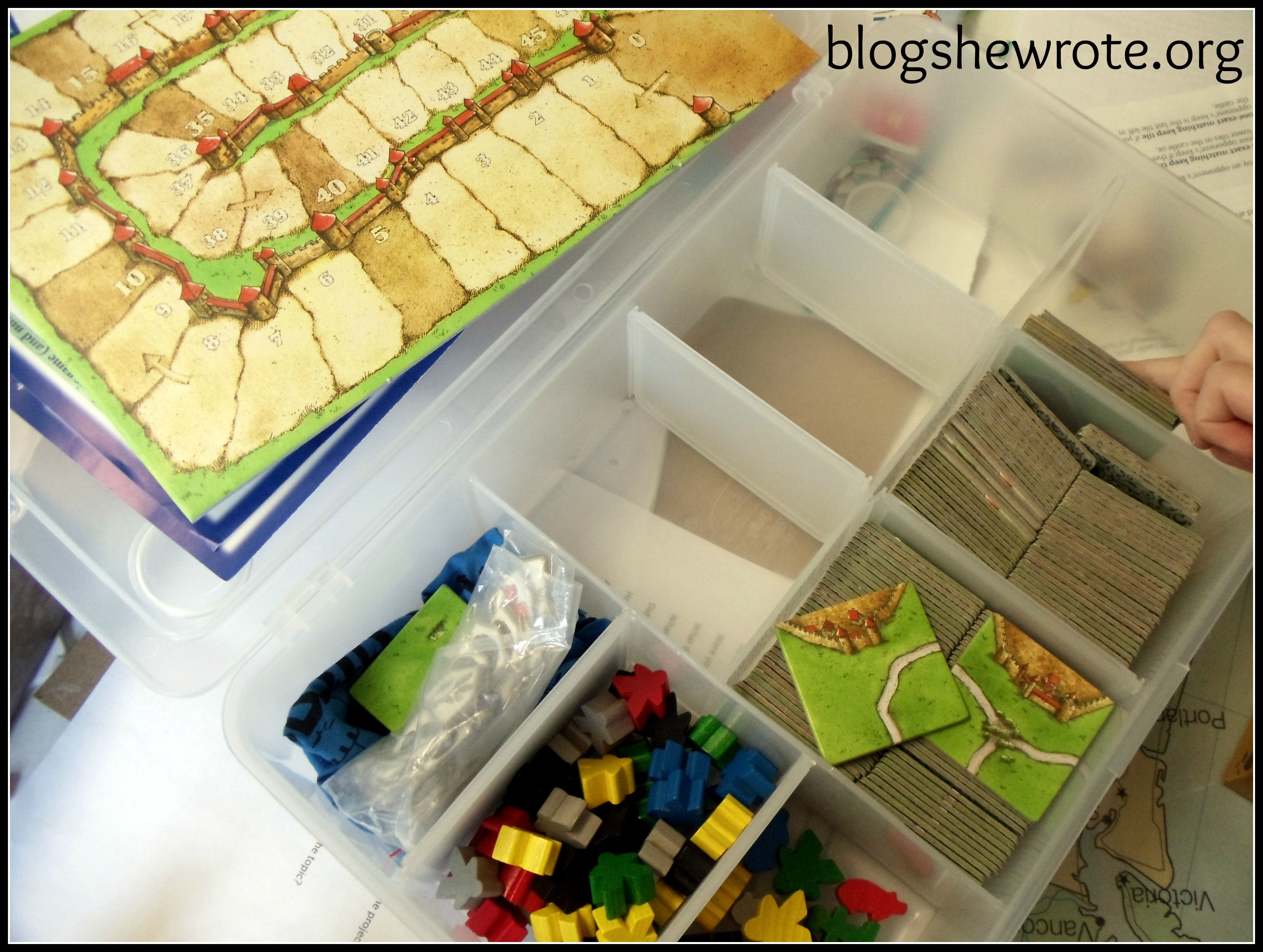 That’s a partial list of the games we own and I’m sure your family has its favorites. Sometimes we pick a game stick out of a jar and play that game…when you have a lot of games it’s a fun way to keep variety in what you play. You might try game sticks in the jar for your Game Themed Adventure Box. 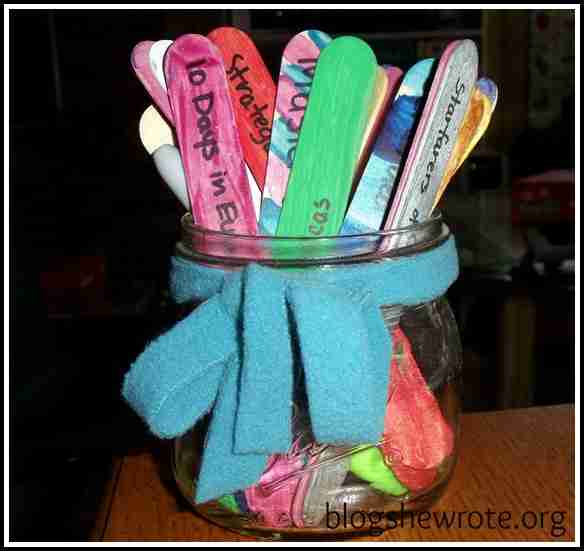 Making Your Own Games: 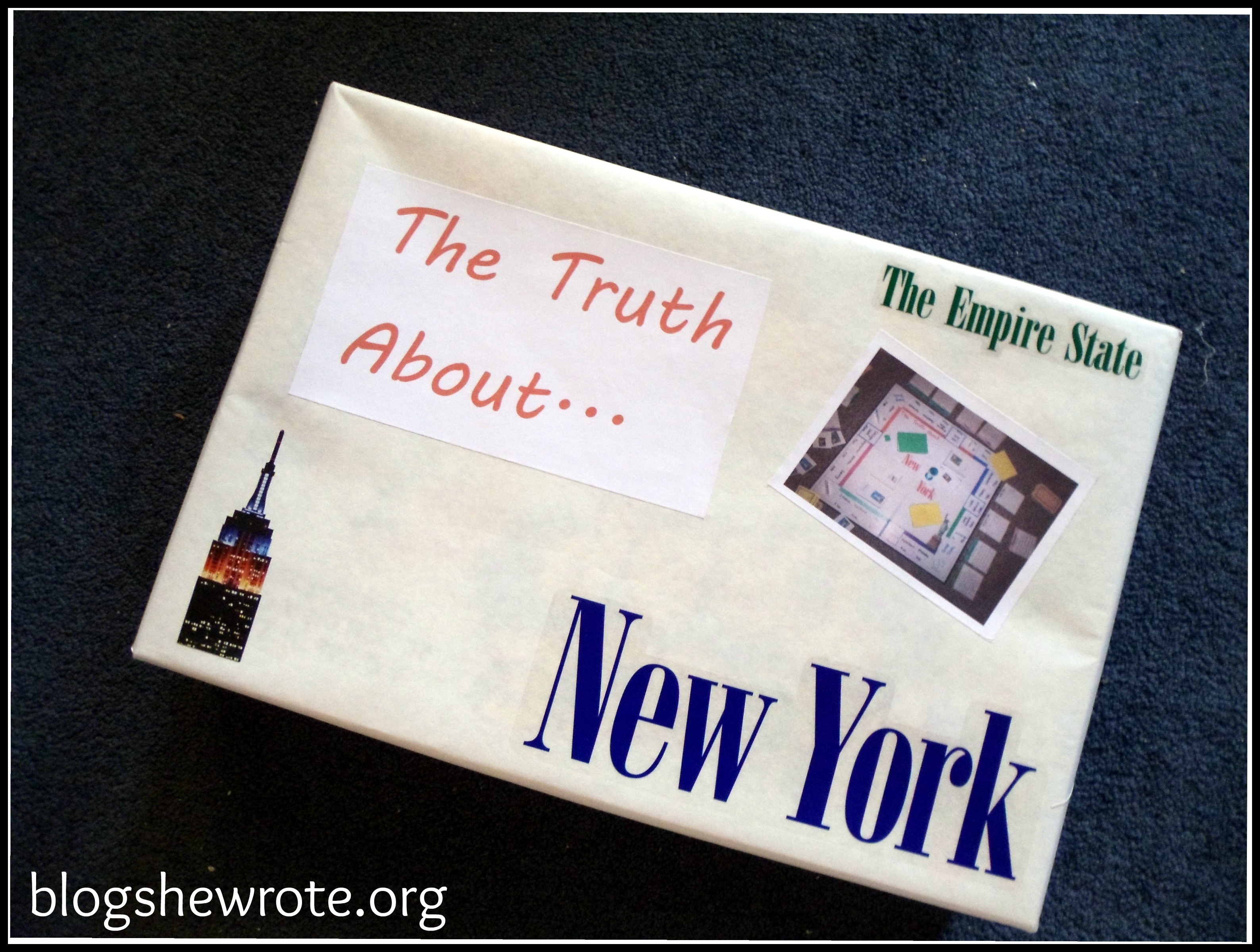 We get our game making materials from Bare Books. You can find several styles of blank boards along with money (blank or printed), game pieces, timers, and dice. The boards make a fabulous starting point for creative game makers! 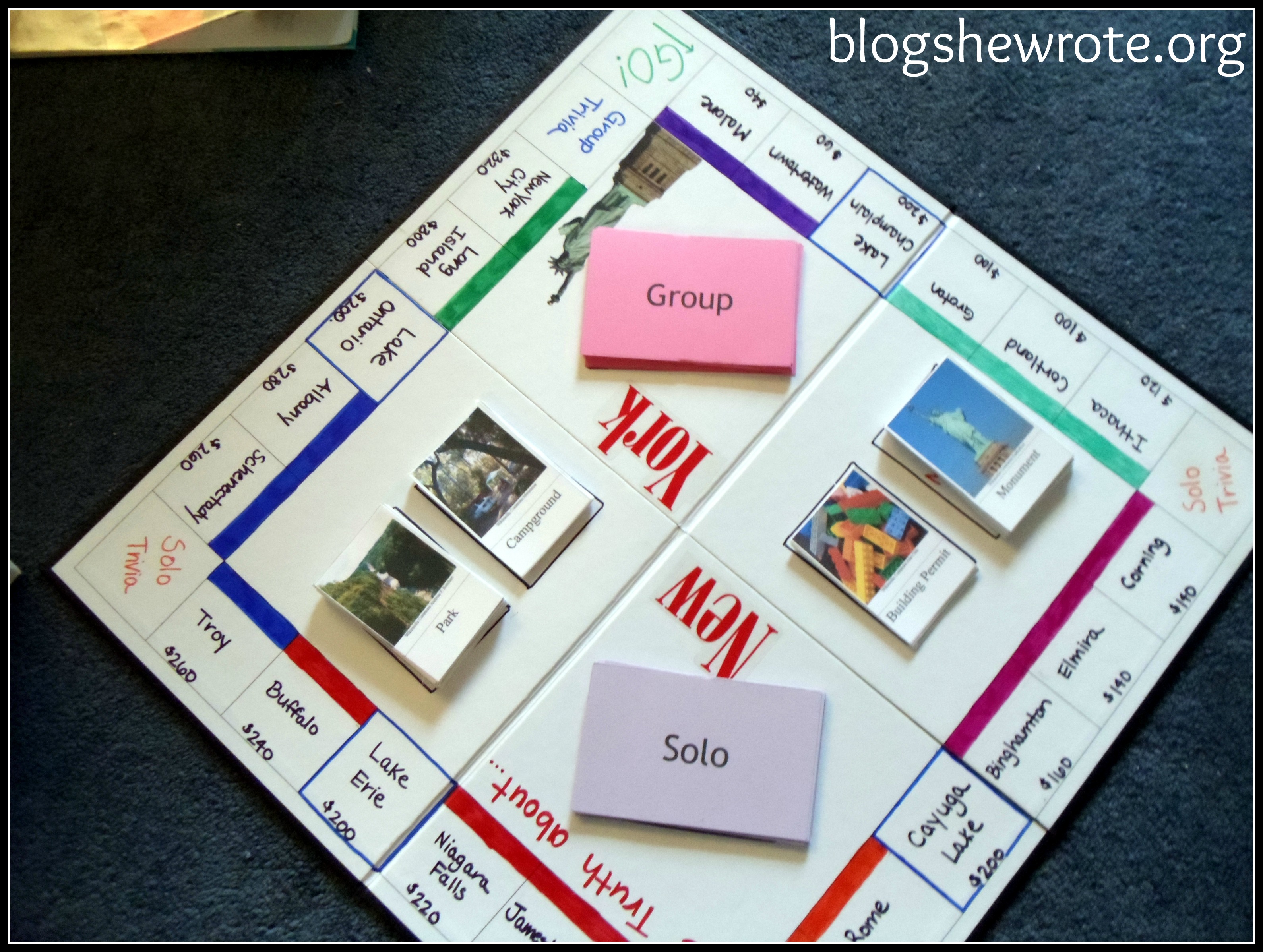 Most of our home made games coincide with something going on in our homeschool, but it’s usually not my suggestion. My oldest, for example, likes to choose his own projects and will usually choose a game. This NY Monopoly-esque game was E14’s idea. He wanted a game that would combine Monopoly type play with state trivia. At first he did his cards by hand, then he learned how to use Microsoft Word to make all his cards. It took him a bit to learn, but the results are fabulous. This won a blue ribbon at the NY State Fair in 2010. 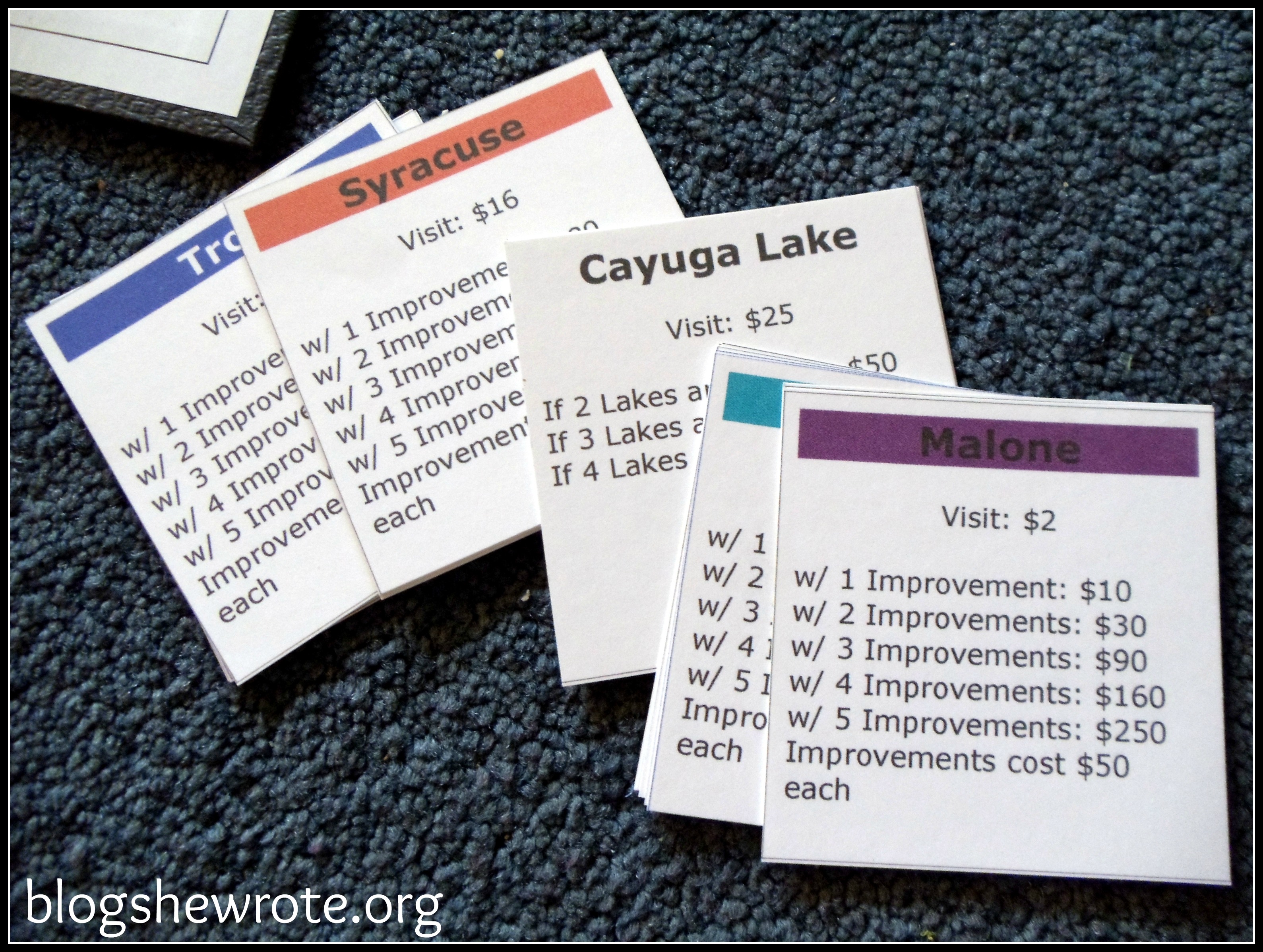 In this game, you are trying to buy improvements for your city including monuments, campgrounds, and parks. In order to build you have to have a building permit. All of these actions require answering NY State History and Geography as part of the turn. So, the basic game design is like a Monopoly game but it has some fun twists.

The key to great homemade games is allowing your kids the time to get imaginative. Summer time adventures offer kids the time. Your job is to provide the materials and fodder for ideas. My kids know they can always print on cardstock and typically we have game boards on hand or another way to make them such has poster board. 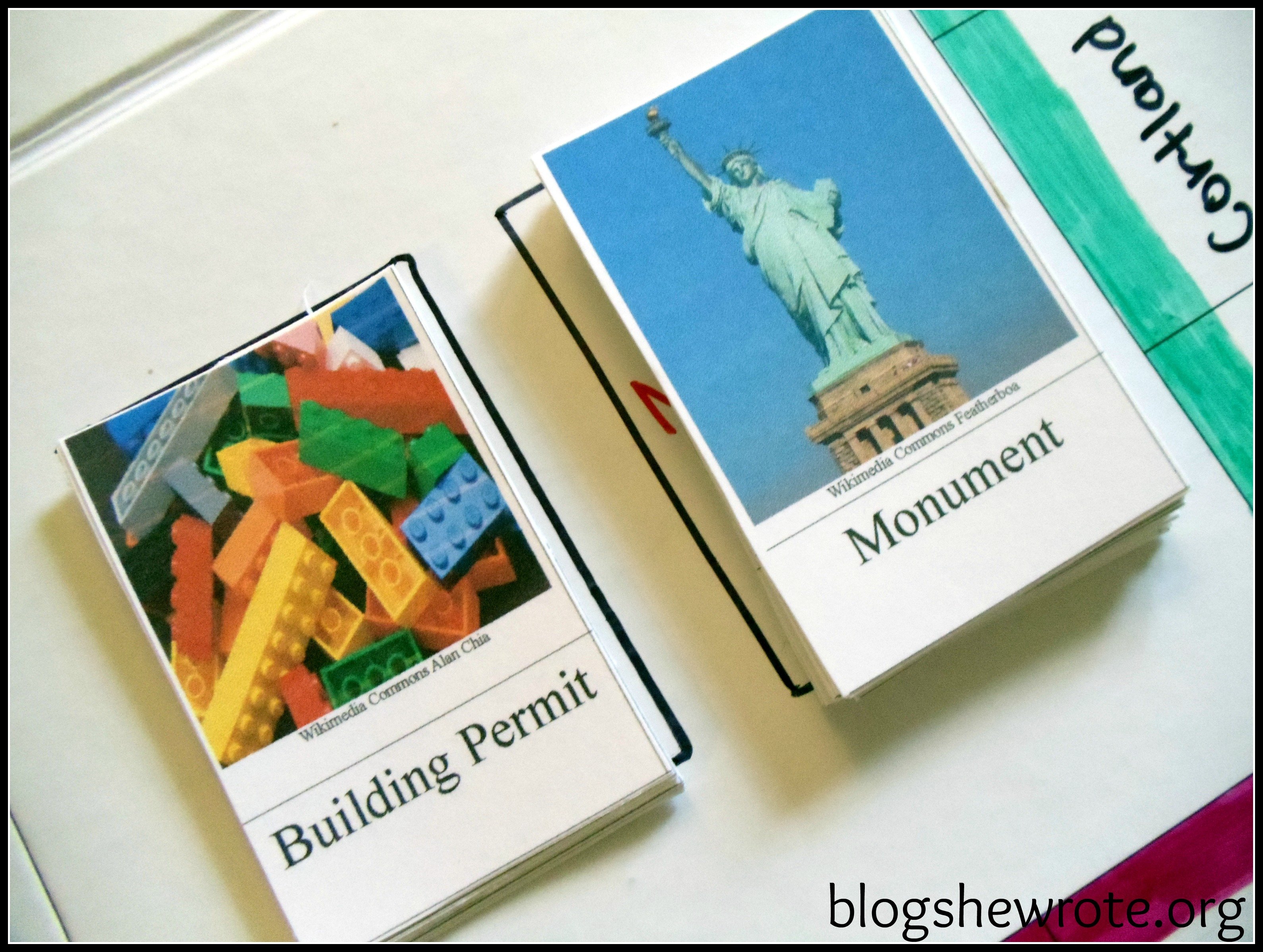 Last spring 14 worked on creating another game. This one is called Conversion and is a culmination of his studies of the early Church and Paul’s missionary travels. Again, this was his idea and he worked on it for a long time. He wanted a game that was based on converting the people to Christianity and he included much of what he learned while studying the early Church. He did a fantastic job coming up with scenarios where you’d encounter people and then another scenario based on what decision you made from the scenario card. 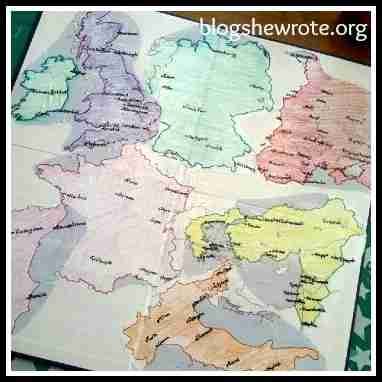 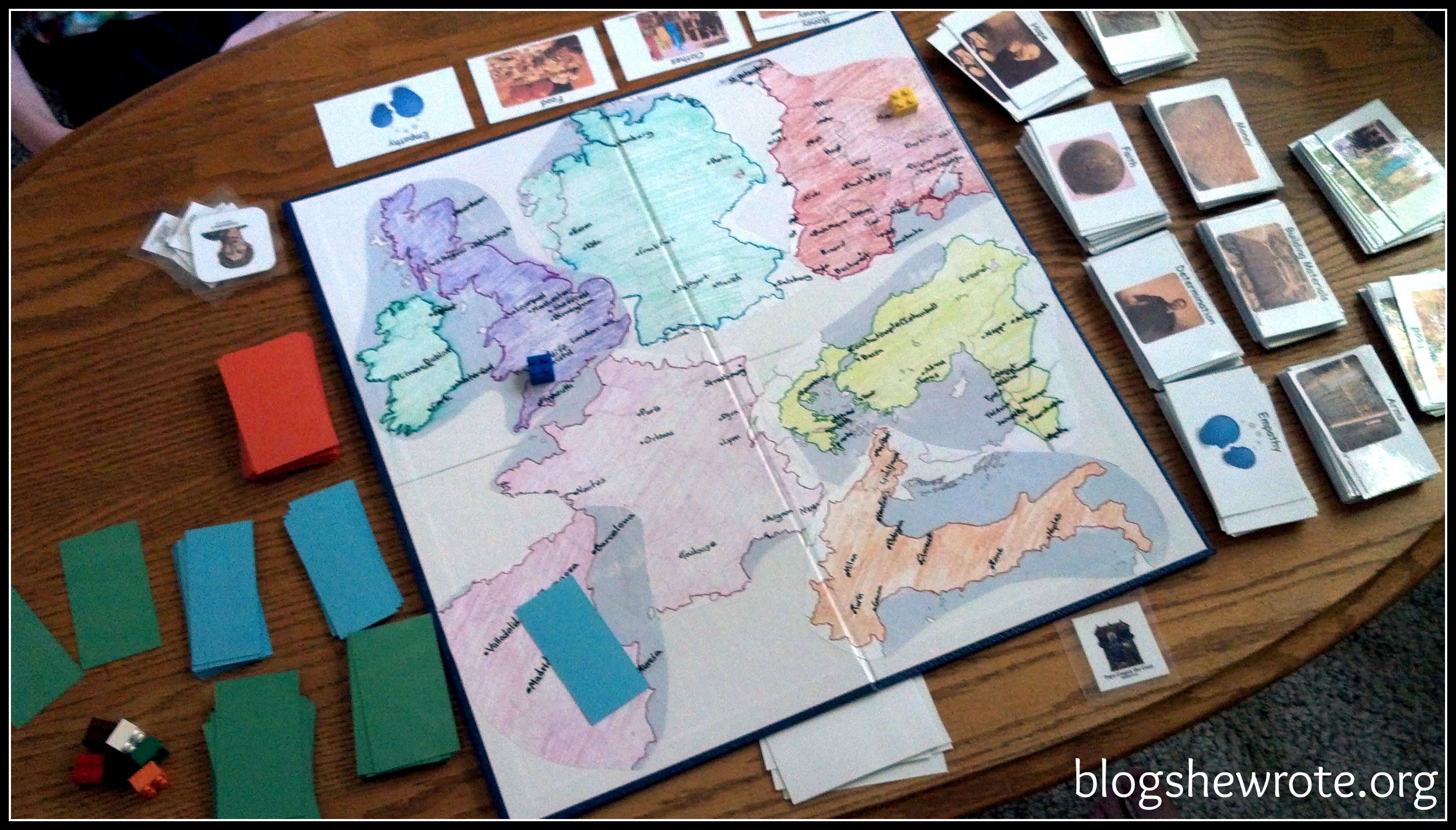 In the end, he came up with a nice game which plays relatively well. After the county fair last summer, we worked out the game’s playability before sending it on to the NY State Fair where it earned a blue ribbon. Playability is key! We found out we were lacking resources to start the game. We didn’t have enough to do much and we couldn’t save a lot quickly. The directions were adjusted to give the new play a chance. This was a great exercise in reliability and whether or not people enjoyed playing the game. 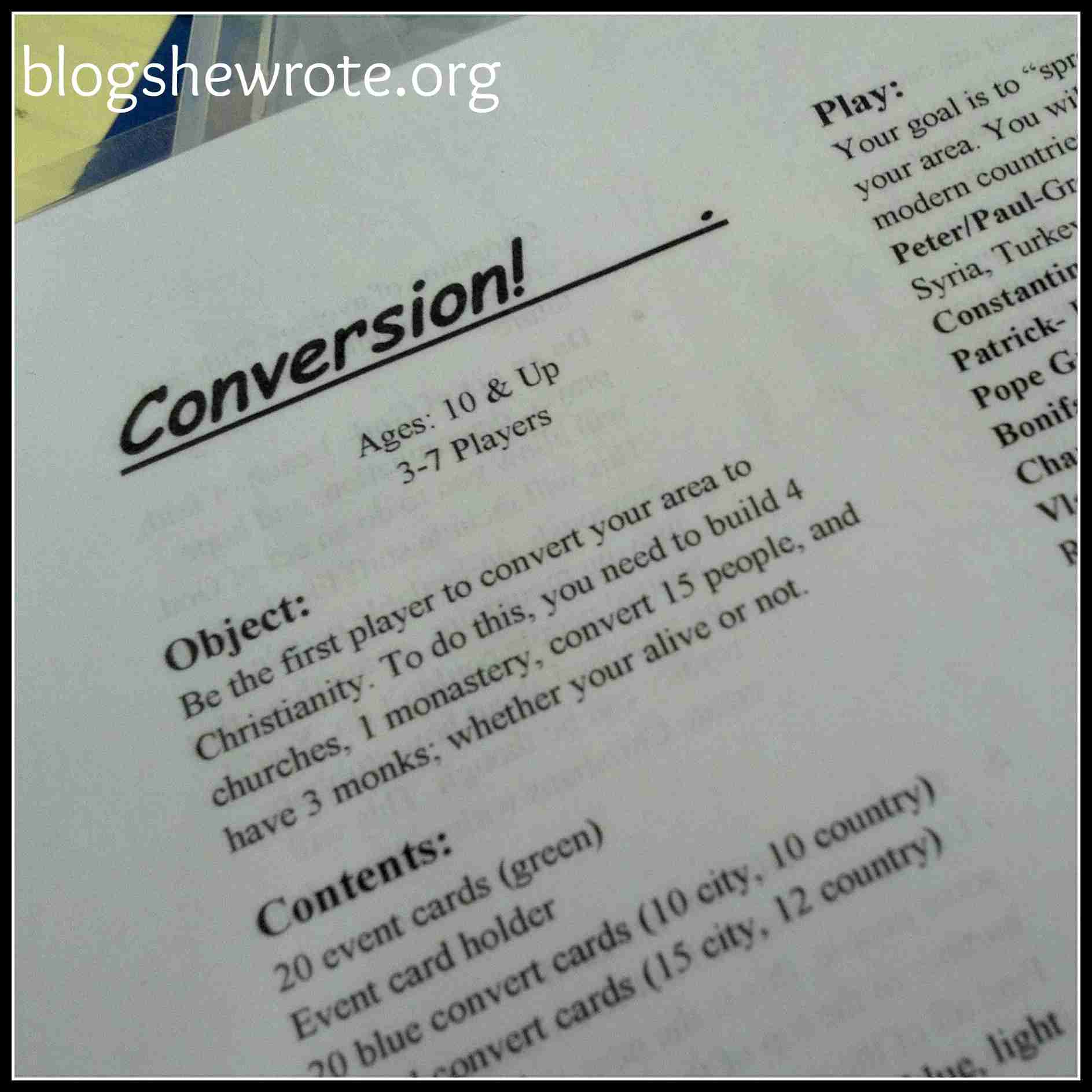 The hallmark of this game is all the creative scenarios missionaries could walk into…all of them a potential opportunity to make converts to Christianity. If you’d like to read more about the game play of Conversion, I blogged about it last summer. 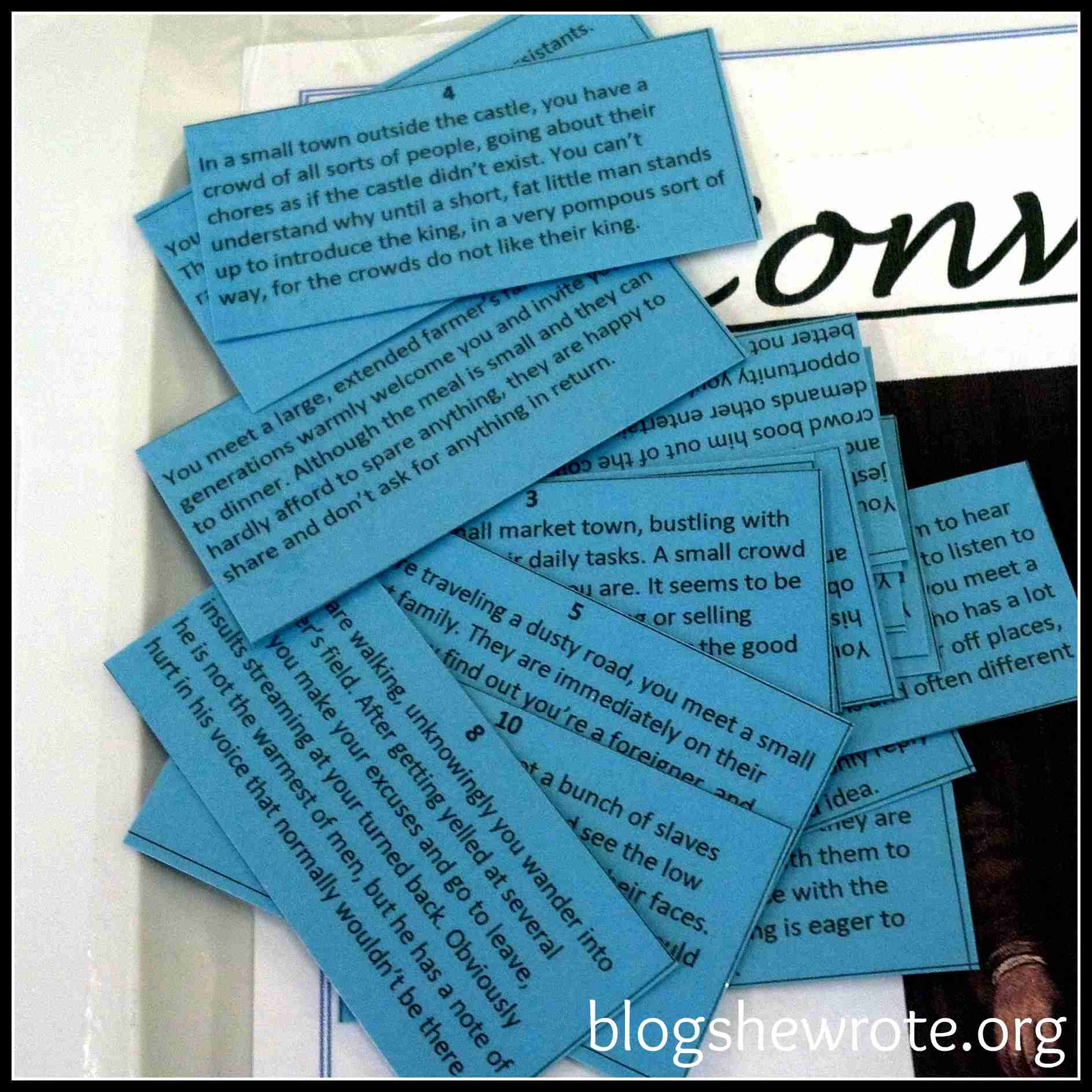 Some games are a lot simpler like the pictures of animals all laminated. I used this game to practice animal classification as we encounter the animals in our studies. It’s mostly a sorting game, but it has a few variations. 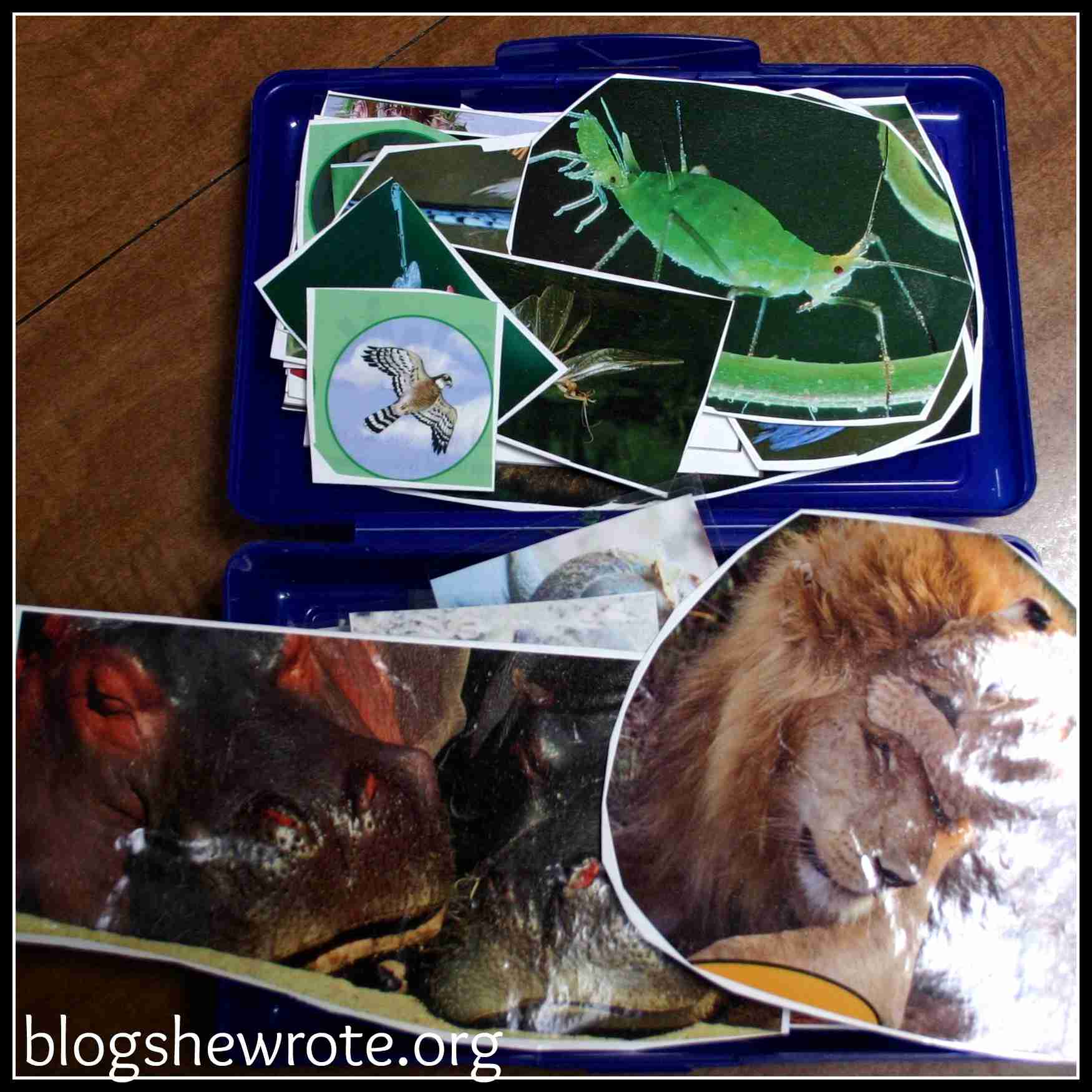 Books for Game Makers and Players:

The Monopoly Book– Strategy and Tactics of the World’s Most Popular Game. My kids loved this book. It has a history of the game along with ways to win!

The Game Makers– The Story of the Parker Brothers. Fun history of the gaming brothers’ company

Bananagrams for Kids– a puzzle book for kids

Bananagrams: The Official Book- a puzzle book for all ages with facts about words and bananas

The Games We Played: The Golden Age of Board & Table Games– this one has great reviews for providing an overview of the past in great illustrations

Chess Puzzles– great book for chess fans. This one is for kids who already play and want to improve their game. Our kids have enjoyed it a lot. 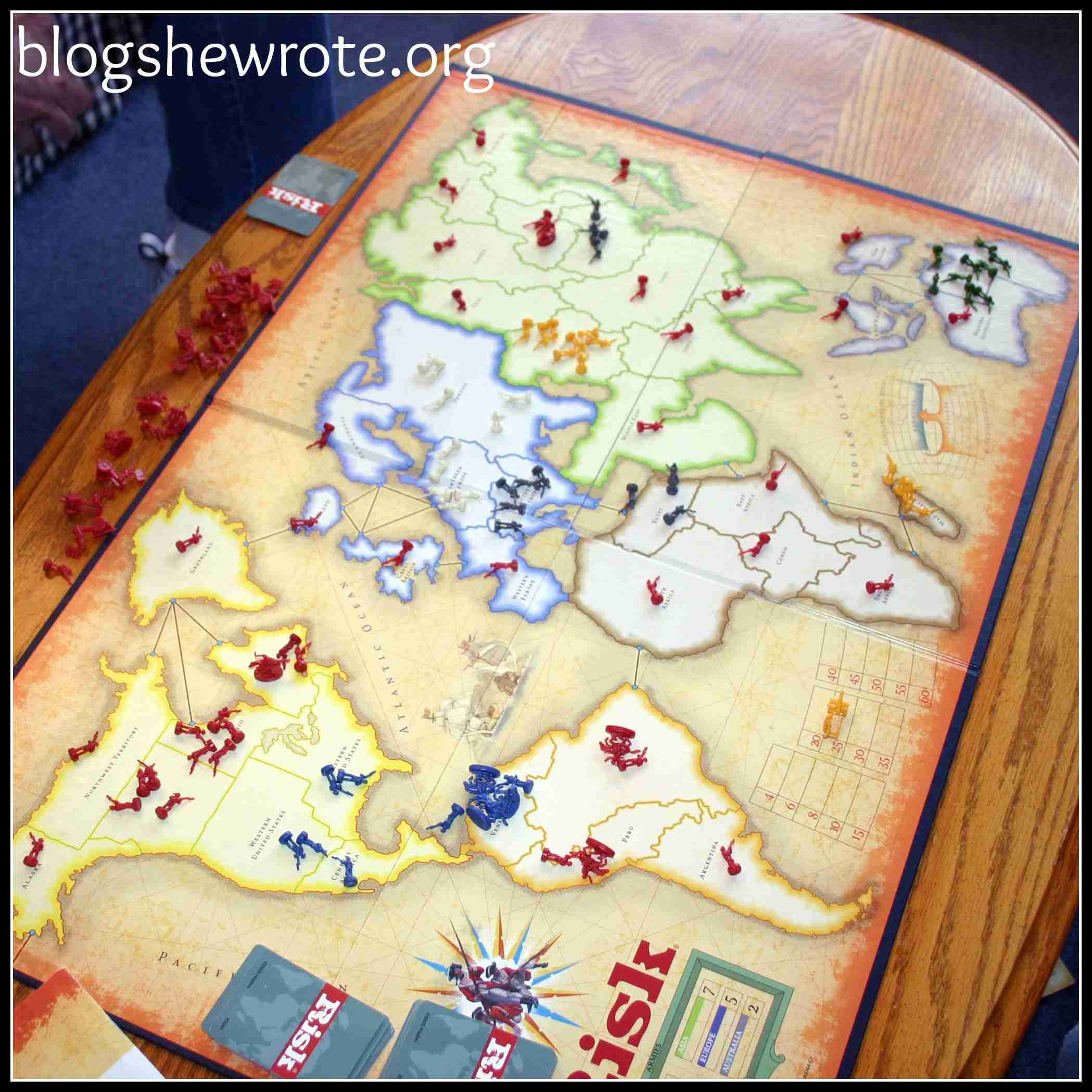 A Game Themed Adventure Box full of games to play, materials to create his own games, and game themed books will provides hours of creative play time for a game loving child.

Have you made homemade games at your house? Tell us about them here! 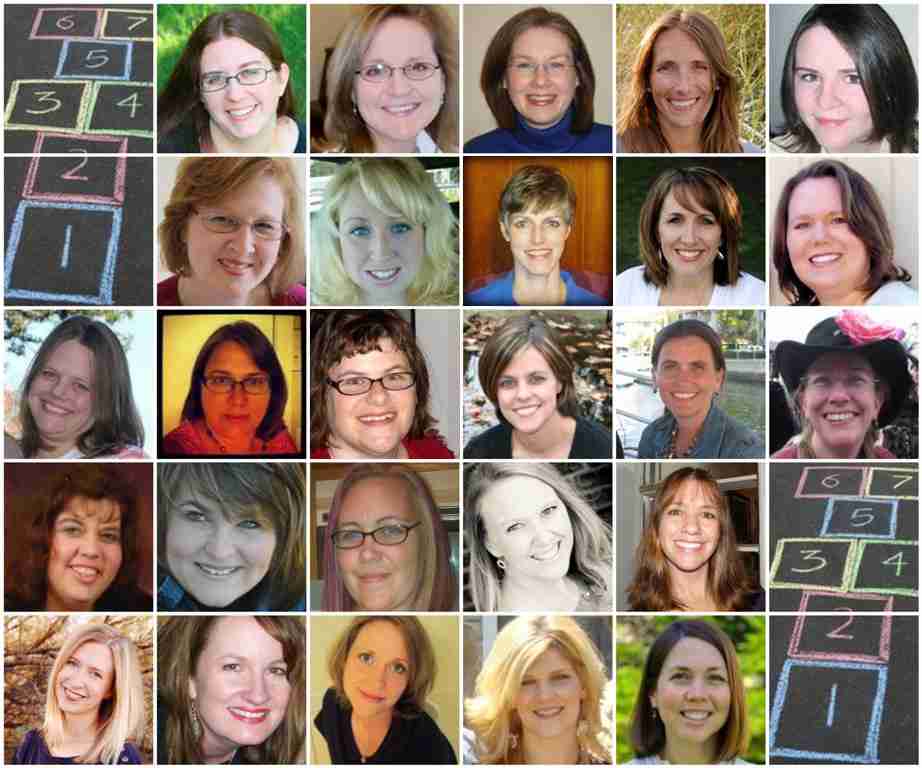 Be sure to check out the other bloggers who are sharing a series this week through iHN’s Spring 2013 Hopscotch. 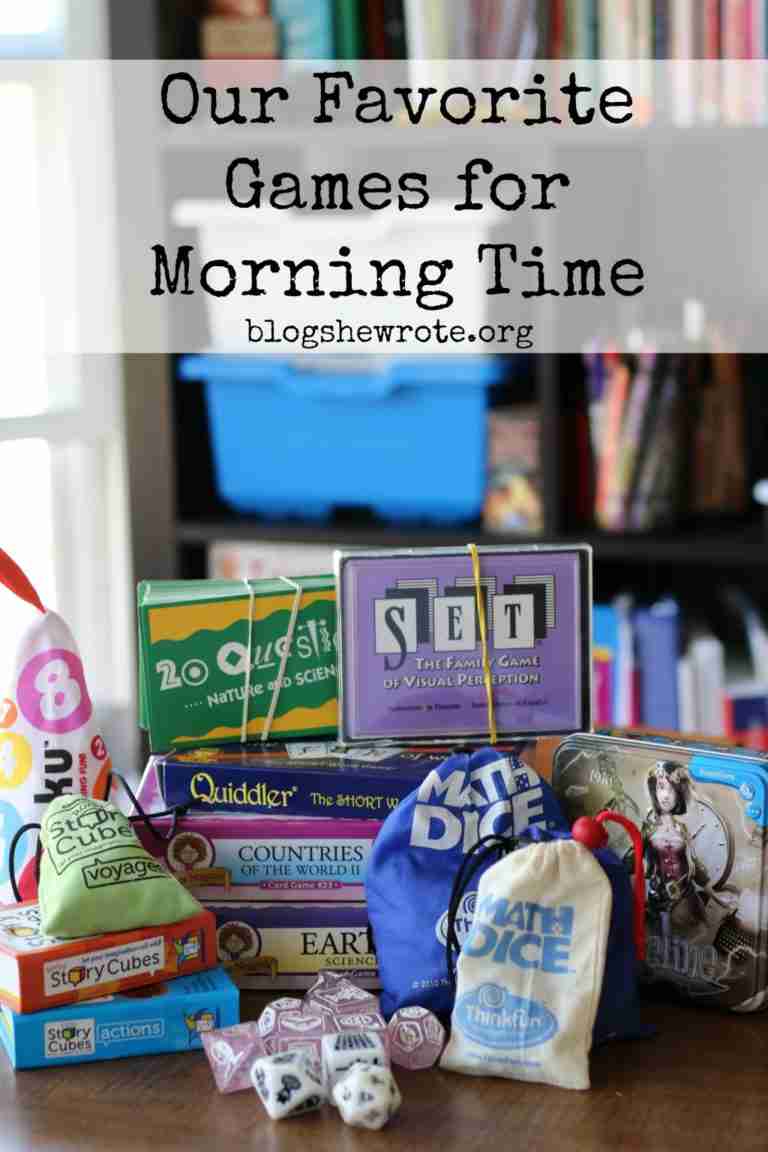 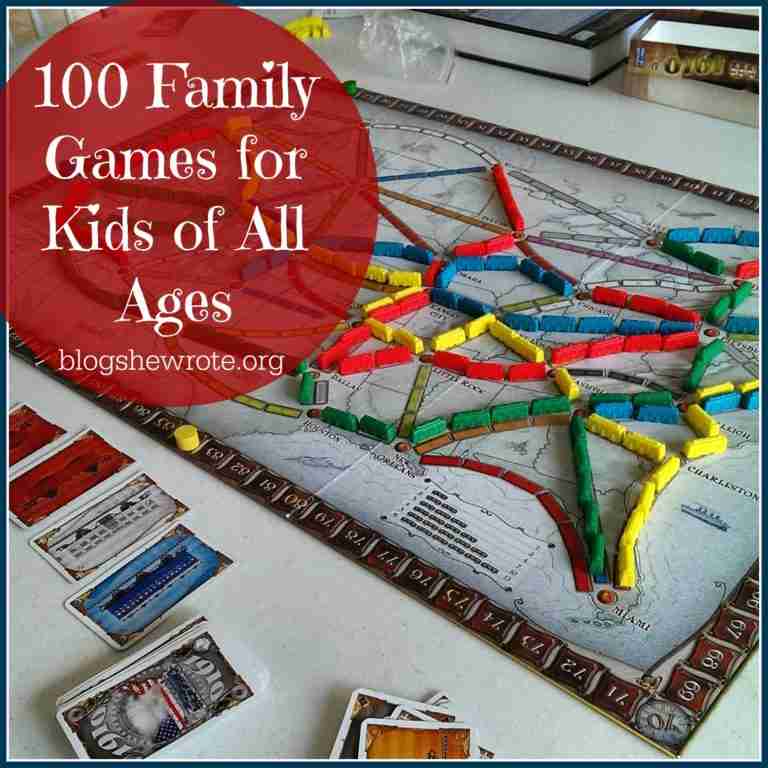